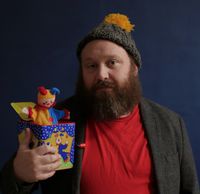 Jonny does not know his Dad. He is very suddenly a Dad. ‘Forgiveness’ is a new solo show about the things that form and affect who we are; if and how we can escape them and move on. Hilarious and heartwarming, it's a show about reluctant fathers, bad life choices and one very unfortunate chicken.

Jonny Donahoe is the co-creator and performer of ‘Every Brilliant Thing’, which he performed more than four hundred times over four continents, including five months off-Broadway. The show was eventually filmed and screened on HBO. He is also the frontman of musical-comedy-satirists, Jonny and The Baptists.

“Hilarious and moving throughout, will make you laugh until you cry and probably cry until you laugh, too. A must-see.” Sunday Post (on Jonny & the Baptists)