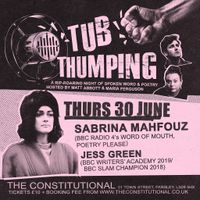 SABRINA MAHFOUZ - Sabrina is a writer and performer, raised in London and Cairo. She is a Fellow of the Royal Society of Literature (FRSL) and resident writer at Shakespeare’s Globe Theatre. Her most recent theatre show was "A History of Water in the Middle East" (Royal Court). She's a regular on BBC Radio 4 recently presenting Word of Mouth, Poetry Please and writing fiction for Short Works.

JESS GREEN - Jess Green is an award-winning performance poet and script writer for theatre and TV. She has written episodes of EastEnders, Holby City and Casualty, has work in development with Wall to Wall and BBC Studios, was part of BBC Writers Academy 2019 and became BBC Slam Champion in 2018. Jess developed both of her poetry collections into live shows which received 5* at the Edinburgh Fringe and on their national tours.