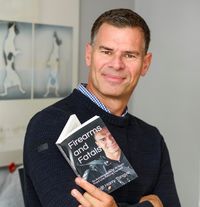 Dave Wardell is known for his appearance on Britain’s Got Talent where he moved the judges to tears with the powerful and emotive story of an incident whilst he was on duty where he and his police dog Finn were stabbed. The pair also won the hearts and minds of the nation and with such support, went on to implement Finn’s Law - the animal welfare bill that prevents those who attack or injure service animals from claiming self-defence.

Cornishman Harry Tangye is often referred to by the media as Britain’s most famous Twitter cop. He recently retired from the force after serving 30 years as an armed response, traffic and VIP protection sergeant. He went on to write a best-selling autobiography titled Firearms and Fatals, and a debut novel called The Cornish Scoop.

Tangye and Wardell also host the popular weekly video and audio podcast Frontline Chat that attracts the policing and non-policing community from across the country.

There will be a book signing after the event.