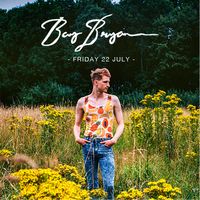 Manchester-based singer, songwriter and multidisciplinary artist Bay Bryan originally hails from the Rocky Mountains of Colorado (USA). Their exquisite ability to take us on a journey through song reminds of artists like Laura Marling, Rufus Wainwright and Anaïs Mitchell. In performance, Bay captivates their audience, drawing from over 10 years of experience as an actor, drag queen and storyteller. “The Not So Ugly Sisters,” a theatre show that Bay co-composed songs for was named in The Guardian as one of the Top 25 shows to book for Christmas 2021. The short film “Egg Party,” with music scored by Bay, won the audience choice awards at both the Coven and Cinequest Film Festivals (2021).

‘The Meadow,’ Bay’s current project, is an alternative/indie-folk concept album ultimately about the bitter-sweet process of transitioning from one life-chapter into the next. Two singles have been released from the project so far and have both received overwhelmingly positive responses, with Indie Top 39 even naming “Sticky Shadows” the song of 2021.