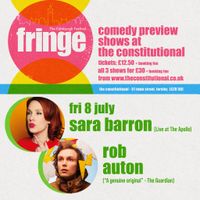 SARA BARRON: Sara Barron is one of the fastest-rising comedians of her generation. Since her 2018 debut at the Edinburgh Fringe, she’s starred on shows including Live at the Apollo (BBC), Would I Lie to You? (BBC) and Frankie Boyle’s New World Order (BBC). A powerhouse live act, Sara’s two stand-up hours, For Worse (2018) and Enemies Closer (2019) have sold out at both the Edinburgh Festival and at multiple runs in London’s Soho Theatre."

ROB AUTON: Rob Auton is an English stand-up comedian, writer, actor, poet and podcaster. He is best known for his series of shows title after and focusing on a specific subject, performed at the Edinburgh Festival Fringe each year since 2012.