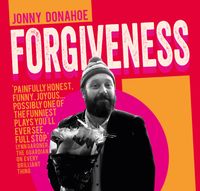 Forgiveness is warm and uplifting show about the things that form who we are. Jonny Donahoe is the co-creator and performer of Every Brilliant Thing, which he performed more than four hundred times over four continents, including five months off-Broadway. The show was eventually filmed and screened on HBO. He was nominated for a Drama Desk Award, Lucille Lortel Award and an Off-Broadway Alliance Award for his performance.

He is the frontman of musical-comedy-satirists, Jonny and The Baptists, as well regularly performing stand-up in his own right. His play “30 Christmases”, (starring himself and Rachel Parris), premiered in Oxford, before transferring to London. Upcoming is a twelve-part series on parenthood with real-life partner Josie Long called “Josie and Jonny Are Having a Baby (With You)” for American Podcast Network, Stitcher.